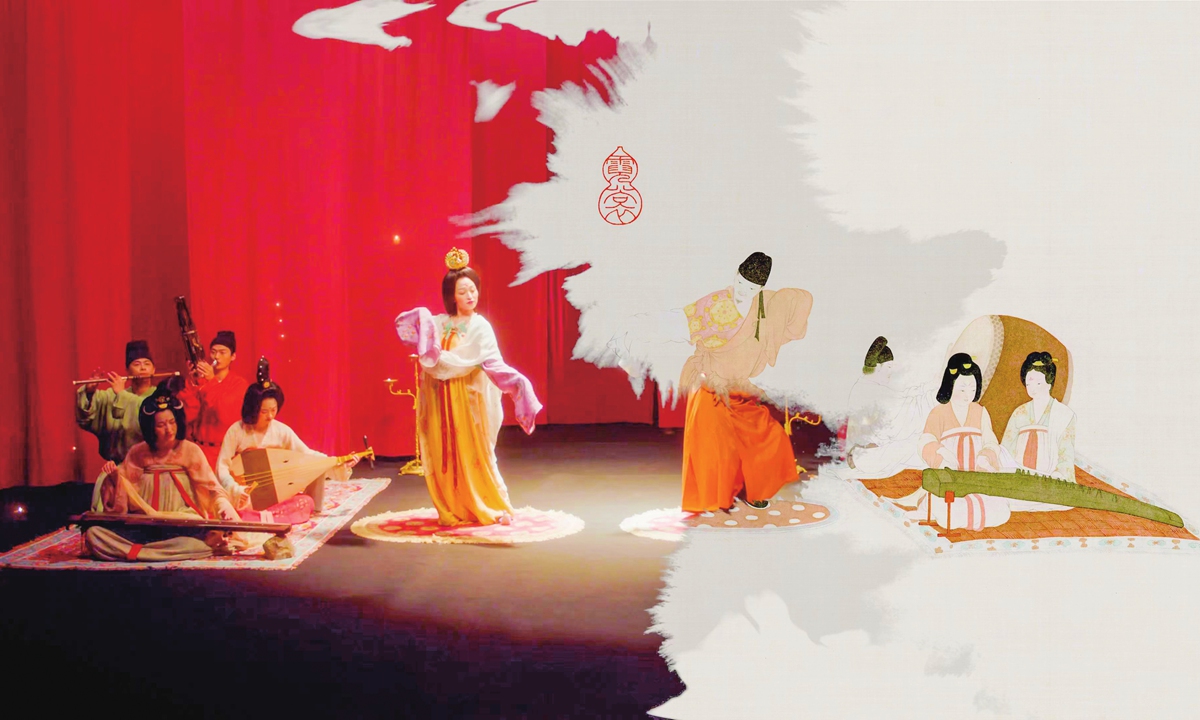 As three performers dressed in traditional Chinese opera costumes perform a scene from Liyuan Opera, an 800-year-old branch of Chinese Opera, the sound of modern pop music instruments such as the guitar, drums and synthesizer suddenly merge with the ancient music, turning the familiar performance into something that feels fresh and new. This performance was part of a concert held in Quanzhou, East China's Fujian Province, over the Mid-Autumn Festival weekend to show the charm of Liyuan Opera, one of China's many national intangible cultural heritages. Combining modern pop musical elements and centuries-old traditional music, the performers have injected this ancient art form with new vitality as they seek to answer the question: How can traditional Chinese music gain the attention of younger audiences in China and the rest of the world? Modern twist With continuous new achievements in various fields in China, people have come to increasingly cherish the inheritance and propagation of the country's vast traditional culture. In response, many young composers in recent years have tried their hands at making new art creations based on traditional culture. Musicians with the Central Chinese Orchestra have made many such attempts. Zhao Cong, head of the orchestra and a renowned pipa (Chinese lute) player, created an innovative cross-border work called "Sanxingdui - Shenniao," which presents the concept of the metaverse through a pipa folk song. To capture the attention of today's audiences, the orchestra teamed with a French contemporary artist to present the new song in a music video that restores China's Bronze Age Shu civilization in a virtual world. According to Zhao, the new work also seeks to show the world that traditional Chinese musical instruments can easily merge with and express the essence of modern art and foreign culture. Other Chinese folk music bands are also exploring new twists on traditional culture. One such band in Chengdu, Southwest China's Sichuan Province, was inspired by the music orchestras that played for royalty during the Tang Dynasty (618-907). Wu Yanlin, creator of the band, told the Global Times that they have recreated several rarely heard ancient Chinese instruments such as the chi, an instrument which is similar to a flute. The band has uploaded many music videos online. In these works, the 24 members, dressed in traditional clothing, play ancient instruments and dance to the music as digital technology transports them into ancient paintings such as The Night Revels of Han Xizai. These videos have proved very successful, earning hundreds of thousands of views online. They have also tried playing Western music using traditional Chinese instruments. Wu said that a Christmas carol music video they produced was hailed by overseas netizens when it first came out and that many foreign fans set the Chinese-style Christmas song as their ringtone. Some foreign netizens commented on the video, which sees Santa travels through Tang Dynasty China to deliver Christmas gifts to people, that they didn't realize that Chinese folk instruments could play Western music so well. Expanding influence Traditional Chinese music's influence among young people and international society has been on the rise in recent years, music industry insiders noted. For instance, the Central Chinese Orchestra has established a chamber orchestra named "Li Ren Xing" composed of 12 women whose performances have proven quite popular among young people in China and audiences overseas. In a recent cooperation, this chamber orchestra worked with a German wind orchestra to play a jazz version of "Lift Up Your Veil," injecting youth and vitality into the popular Chinese folk song. The Zi De Guqin Studio, made up of dozens of Chinese in their 30s and 20s, has also gone viral on social media with stylish music videos in which all songs are played using traditional instruments. However, besides traditional Chinese instruments, the music studio has also added African voodoo drums in their works. The drum from Africa is made from a pottery jar and is suited to play music that evokes a sense of mystery. The members of the studio have also felt the enthusiasm of overseas netizens. "One Japanese netizen left a comment on our YouTube channel that said, 'I'm glad to see the teacher of Japanese culture return.' "This was a big compliment for us as it shows that viewers can see the real traditional Chinese culture that is hidden in our music," Tang Bin, a music producer from the studio, told the Global Times.