A signboard of the SCO Samarkand Summit is seen in Samarkand, Uzbekistan. Photo: Courtesy of Embassy of Uzbekistan in China

For his first visits abroad since the COVID-19 pandemic, Chinese President Xi Jinping will be in both Kazakhstan and Uzbekistan and attend the Shanghai Cooperation Organization (SCO) summit. Experts said such visits not only demonstrate that China attaches great importance on Central Asia and the SCO, but also show how China's cooperation with the two Central Asian countries sets a paragon for Beijing's relations with Central Asian nations in wide-ranging areas such as economic collaboration, fighting terrorism and upholding regional stability and peace. Also, the President's visit to a country where the Belt and Road Initiative (BRI) was first proposed, will help to take a glimpse of the fruitful achievement countries have gained together for the past years under the framework, and also signals that China is willing to expand the breadth and depth of bilateral exchanges with those countries, and expand cooperation in many new areas, said experts. A signed article by Xi titled "Build on the Past to Make Greater Strides in China-Kazakhstan Relations" was published Tuesday on the Kazakhstanskaya Pravda newspaper ahead of his state visit to Kazakhstan. "During my upcoming visit, I will have in-depth discussions with President Tokayev on how to further the China-Kazakhstan permanent comprehensive strategic partnership and how to advance our mutually beneficial cooperation across the board. We will set out plans for working together to promote China-Kazakhstan relations with the objective and vision of building a China-Kazakhstan community with a shared future," reads the article. Another signed article by Xi titled "Working Together for a Brighter Future of China-Uzbekistan Relations" was published Tuesday on Uzbek media ahead of his state visit to the Central Asian country. "Over 2,000 years of friendly exchanges and three decades of mutually beneficial cooperation show that enhancing China-Uzbekistan cooperation on all fronts conforms to the trend of history and meets the fundamental interests of both peoples. Standing at the intersection of past and future, we are full of confidence and expectation for a more promising prospect of China-Uzbekistan relations," reads the article. 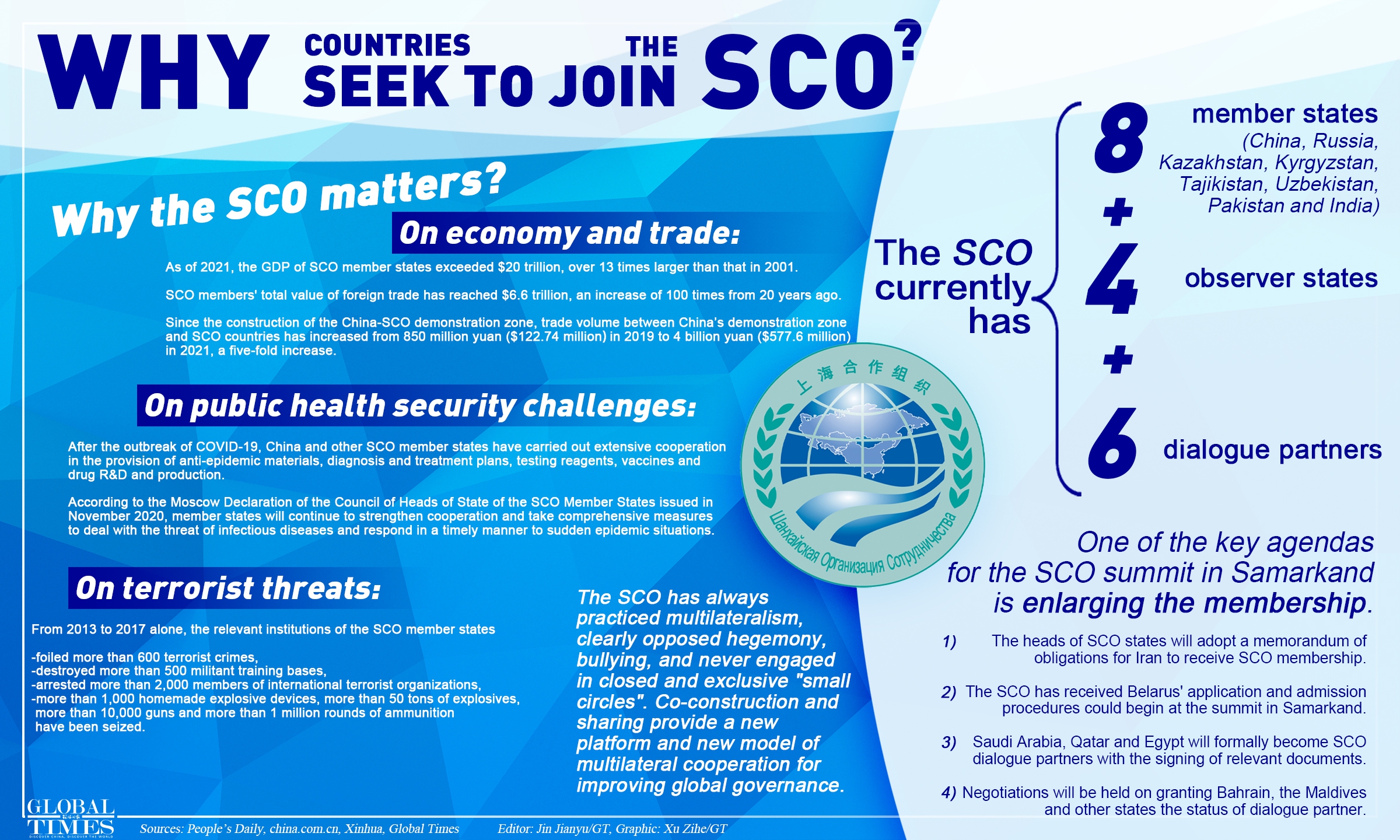 Why countries seek to join the SCO? Graphic: Xu Zihe