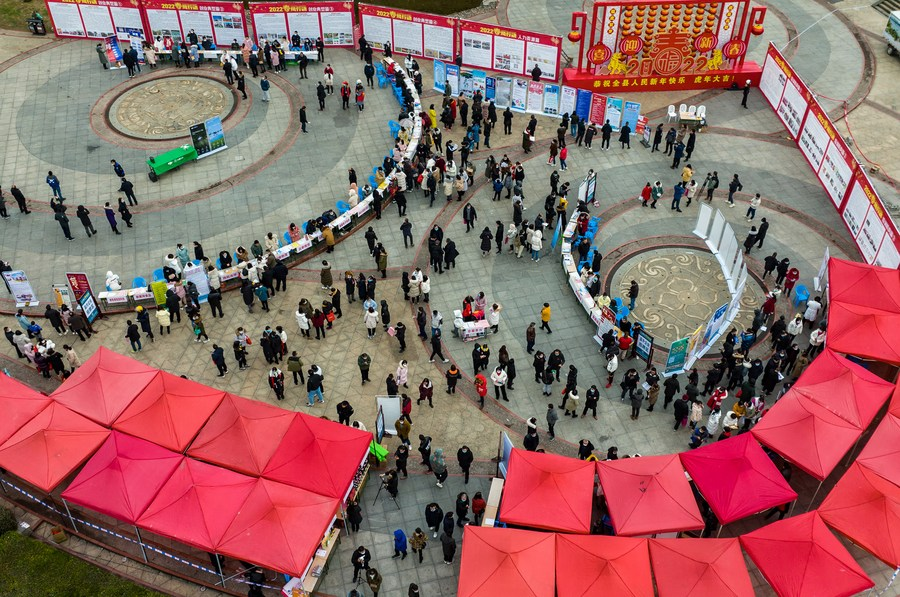 China's employment market has seen signs of an upturn, amid broader improvements in key economic indicators and the implementation of multiple pro-employment policies.

The country's surveyed urban unemployment rate fell to 5.9 percent in May from 6.1 percent in April, compared with the overall goal of keeping the rate no more than 5.5 percent in 2022 set in the government work report.

Key economic indicators have also been on the mend. The purchasing managers' index for China's manufacturing sector, which measures the country's factory activity, came in at 50.2 in June, returning to the expansion territory.

Looking ahead, as the economic activities gradually get back on track, China's employment market is expected to improve further, according to an official with the Ministry of Human Resources and Social Security.

The Xi'an Qiulin Commerce and Trade Co., Ltd. has seen its business revenues slipping since the COVID-19 outbreak, but didn't cut any jobs, thanks to a 3-million-yuan (446,000 U.S. dollars) refund of unemployment insurance premiums and other subsidies that it has received since 2020.

"We have maintained a team of 270, with basically no layoffs," said Wu Pingshan, a human resource staffer with the company.

China earlier implemented policies such as deferring social insurance contributions by employers, and refunding unemployment insurance premiums for enterprises that make no cuts or minimal cuts to staff number. Wednesday's meeting has decided to execute these policies on a one-stop basis.

From January to May, 2.73 million enterprises across the nation received 12.9 billion yuan of unemployment insurance refund, benefiting a total of 51.89 million people, official data showed.

"The COVID-19 pandemic will eventually wane, and we believe that our business will fare better as production and life restore," Wu added.

Liu Zhenzhong, director of the employment service center of the University of South China, has been busy since June coordinating with over 80 companies on online recruitment activities, despite the fact that many students have already graduated.

Many companies are rebooting their recruitment plans as production resumes, and government organs are stepping up efforts to expand employment channels for college graduates, Liu said.

College graduates and migrant workers make up key groups of China's employment pool. According to data, the number of people who reach the working age and will be employed for the first time stands at 16 million this year, marking a new high over the years. Among them, college graduates amounted to 10.76 million, also a historical high.

Keeping this in mind, China will provide tailored employment services on an ongoing basis to graduates who are yet to secure jobs, according to the State Council's Executive Meeting. Policies to expand employment channels for graduates will be effectively implemented. Resumption of in-person recruitment will be expedited. Policies will be rolled out to support service outsourcing industries to hire graduates.

Apart from the key groups, the meeting also highlighted the need to safeguard workers' equal employment rights. Employment discrimination against people who had earlier tested COVID-19 positive but have now recovered will be strictly forbidden.

Thanks to measures to aid the unemployed, 1.96 million people who had previously been laid off landed new jobs between January and May this year.

While the current employment situation has improved, the adverse impacts of COVID-19 have not been fully eliminated, and the general pressure and structural problems on the employment market still exist, China's human resource authorities said, calling on local governments to thoroughly implement the pro-employment policies. -