Xi Focus-Profile: Xi Jinping and his fondness for culture 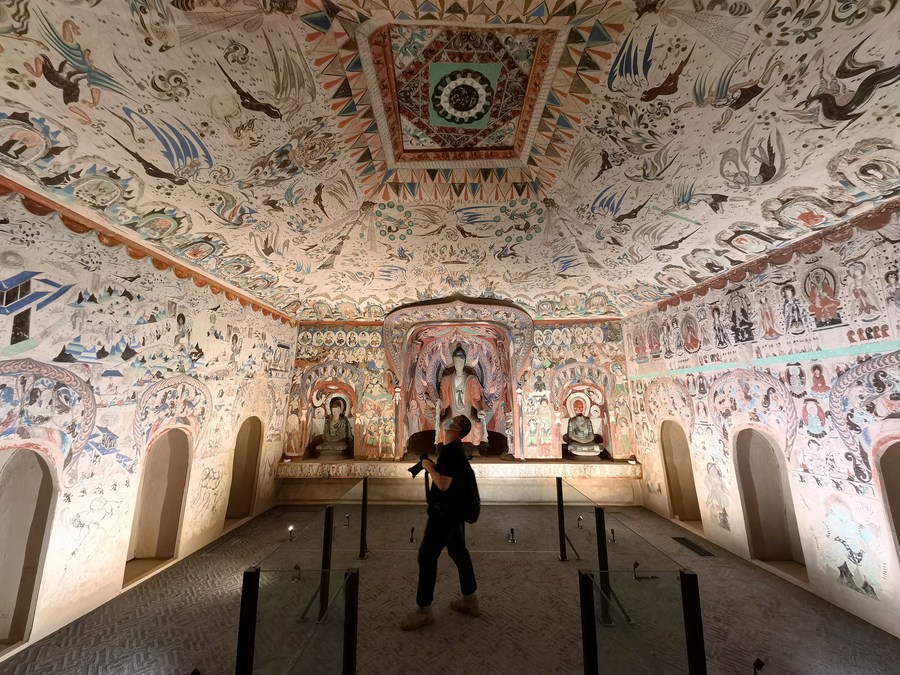 A visitor takes photos of exhibits at an exhibition themed on Dunhuang culture at the Palace Museum, also known as the Forbidden City, in Beijing, capital of China, Sept. 17, 2021. (Xinhua/Li Xin)

Archaeologist Fan Jinshi's memories of the first time she shook hands with President Xi Jinping in 2013 are still vivid.

"You are an expert in Dunhuang culture study," said Xi, also general secretary of the Communist Party of China Central Committee and chairman of the Central Military Commission, when greeting Fan at a meeting to honor national role models.

Fan was surprised and touched. "With so much to do and think, the general secretary still recognized me instantly," she said.

This was one of the five occasions she met and shook hands with Xi. In August 2019, Xi visited the Dunhuang Academy in northwest China's Gansu Province, and talked with experts including Fan. He called for more efforts in preserving the quintessence of Chinese culture.

"We ought to support the inheritance and promotion of fine traditional culture," Xi said.

Xi's attention to culture has remained unchanged over time. To him, culture plays a unique and irreplaceable role in the governance of China and the building of a community with a shared future for humanity.

Xi's acquaintance with Fan was not coincidental. As a leading expert in the field of Dunhuang culture study, Fan's work is an important part of the preservation of traditional Chinese culture.

The city of Dunhuang, where Fan worked, is home to the millennium-old Mogao Grottoes. In 1987, the grottoes were listed as a UNESCO world cultural heritage site.

During his 2019 inspection to Gansu, Xi set aside time to visit the grottoes. Appreciating the sculptures and murals, he called for redoubling efforts to protect these artworks.

"The cultural relics our ancestors entrusted to us must be cherished," he said.

Xi's concern for cultural relics is not limited to UNESCO-certified ones. He has aided the conservation efforts for valuable cultural heritage on numerous occasions, averting negligence or damage.

His commitment to such efforts was evident in the early years of this career when he was serving as a county official in Hebei Province.

In the early 1980s, Xi worked as the Party chief of Zhengding County. Recalling that period, his former colleague Shi Wensheng said Xi took great interest in history. "He was exceptionally meticulous about the protection of local cultural relics."

Shi recounted that Xi once noticed a grimy stele by a local temple which appeared to be an ordinary piece of carved stone at first glance. But as someone well-versed in the local history, Xi instantly realized the stele was an art piece by the Yuan Dynasty calligrapher Zhao Mengfu.

Xi then summoned the county official in charge of cultural preservation. "If we cannot protect our relics, we will be guilty of wrongdoings and be ashamed to face the future generations," he admonished the official.

Size is never a determinant of a relic's historical and cultural worth. This is perhaps why Xi firmly believes that all cultural relics, whether they are as small as a single stele or as big as an entire ancient city, must be carefully preserved.

In 2003, Xi, as the Party chief of Zhejiang Province, took a trip to the archaeological ruins of Liangzhu ancient city. There were about 30 mining sites around the site, generating excessive dust and noise pollution that turned the whole area into, as one archaeologist said, "something like a war zone."

It was not an uncommon scene during the days when archaeological protection was often compromised for the need of development. But Xi insisted that economic growth should not be at odds with cultural preservation.

"The Liangzhu archaeological ruins bear testimony to the existence of at least 5,000 years of Chinese civilization," Xi said, adding that "it is an invaluable treasure that cannot be replaced."

Over the past decade, a number of Chinese sites made it into the UNESCO list of world cultural heritage. Many of them, including the Liangzhu ruins, the West Lake and the Grand Canal, have garnered considerable attention from Xi himself.

The relics are tangible manifestations of the fine traditional culture, or "the root and soul of the Chinese nation" in Xi's words.

Xi's attention to relic preservation is just one aspect of his respect for the Chinese wisdom that has been passed down through the ages.

"Without the 5,000-year-old Chinese civilization, there won't be such thing as Chinese characteristics," Xi once said during a visit to a park dedicated to Zhu Xi, a Neo-Confucian master of the Song Dynasty.

"He carefully looked at a quote from Zhu written on a wall that reads 'the people are the foundation of a country, and are also what the rule of a country is for'," said Zhang Jianguang, a local researcher who guided Xi's visit. 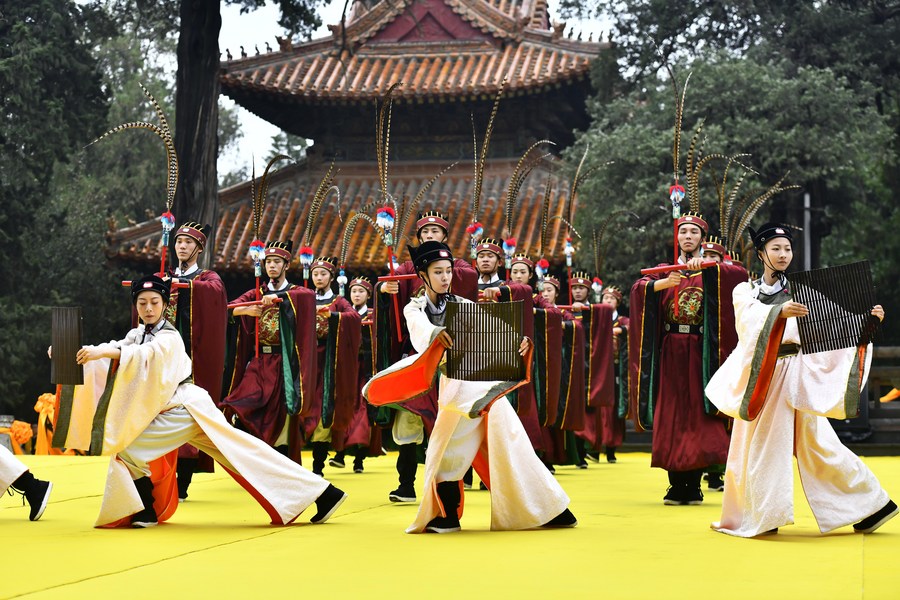 A ceremony marking the 2,572nd anniversary of the birth of ancient Chinese educator and thinker Confucius is held at the Confucius Temple in Qufu, east China's Shandong Province, Sept. 28, 2021. (Xinhua/Guo Xulei)

It was not the first time Xi paid tribute to ancient philosophers. In 2014, he attended an international seminar marking the 2,565th anniversary of the birth of Confucius. For more than 2,000 years, the thoughts of the great thinker have inspired generations of Chinese people.

"The thought of cherishing peace is etched deeply into the spirit of the Chinese nation," Xi said. "To this day, it has remained a basic principle of China in handling international relations."

It is no secret that Xi, familiar with ancient Chinese aphorisms and proverbs, has often quoted the words of historical figures. By quoting them, Xi seeks to bring the wisdom passed down in history into the governance of contemporary China. To him, the answers to many questions today can be found in history.

"History helps us understand the failures and successes of the past, and learn lessons from the rise and fall of states," Xi once said.

Xi has, on many occasions, illustrated the principles on state governance by quoting celebrated scholars, philosophers and even poets in Chinese history.

When visiting the exhibition "The Road of Rejuvenation" in late 2012, Xi, who not long ago assumed the Party's top post, described China's future development by quoting the great poet Li Bai of the Tang Dynasty.

The country will "forge ahead like a gigantic ship breaking through strong winds and heavy waves," Xi said.

Who does the culture serve? Chinese leaders believe that culture should never be a product that appeals to the taste and pleasure of some privileged group.

As Xi has said, the fundamental orientation of literature and art is to serve the people and socialism, and this must be firmly upheld.

As a vast country, China is home to diverse cultures. Many folk cultures have emerged and evolved throughout the years, each reflecting the history, traits and society of its place of origin.

Visiting Shaanxi Province in September 2021, Xi was delighted to be greeted by a stunning performance of Yangge, a traditional folk dance in northern China and national intangible cultural heritage.

"What a dance! Are you all professionals?" Xi asked the dancers.

"Some of us are; some are still learning the dance," they replied.

"Folk art is precious to the Chinese nation, it should be well preserved, inherited, and be put into good use," he said.

By respecting different folk arts, the people can be brought closer to each other. This is also true for the international society. Xi has often emphasized the importance of countries respecting each other's culture.

"Each civilization is the crystallization of human creation, and each is beautiful in its own way," he said. "Civilizations don't have to clash with each other; what is needed are the eyes to see the beauty in all civilizations."

At a young age, Xi was an avid reader of foreign literary works. When he lived in rural Shaanxi Province about half a century ago, Xi once walked 15 km to borrow a copy of Goethe's Faust.

Xi recalled that he was so absorbed by the book that he was reluctant to return it. "He (owner of the book) came to ask for it three times. Each time I invited him to scrambled eggs, and then saw him off. And I kept reading."

In the decades that followed, Xi's interest in world civilization continued. As the country's top leader, Xi has more than once elaborated on the Chinese idea about the world and international relationships by alluding to other civilizations.

In November 2019, when he visited the Acropolis Museum in Athens, Xi stopped to appreciate the relief of the "Pensive Athena," the goddess of warfare and wisdom in Greek mythology.

"She is thinking what wars are truly for," Xi told then Greek president Prokopis Pavlopoulos, who accompanied him on the trip. Xi went on to cite a Chinese proverb that goes in the same vein of advocating peace: the true art of war is the art of stopping wars.

Just as Xi pointed out, diversity of civilizations should not be a source of global conflict; rather, it should be an engine driving the advance of human civilizations. -