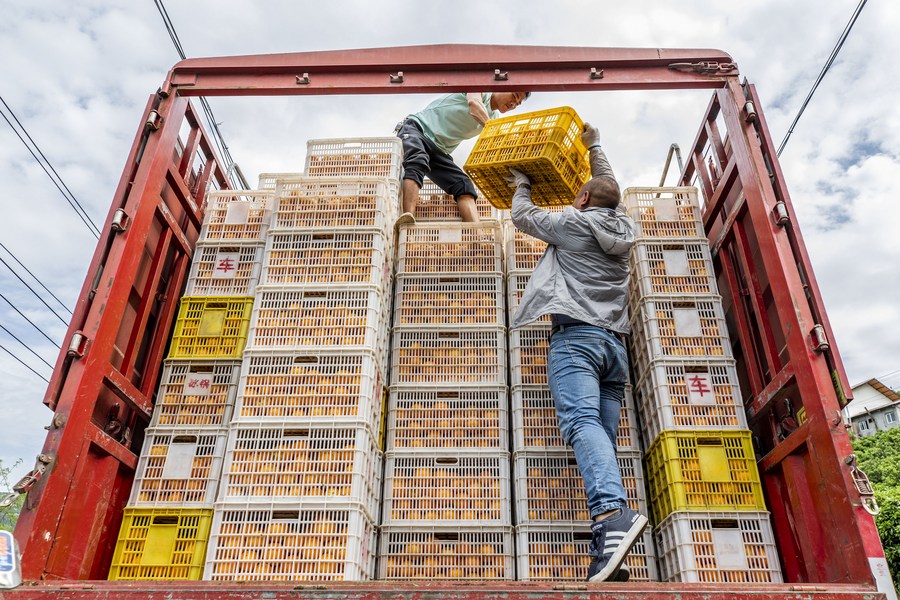 Amid COVID-19 disruptions, China has spared no effort in ensuring unimpeded logistics and stable supply chains as part of its resilience advancement of economic flows.

"We must consider a full picture of national development to ensure unimpeded transportation and logistics, normalizing key industrial and supply chains, suppliers for COVID response, and critical infrastructure," said a recent meeting of the Political Bureau of the Communist Party of China Central Committee.

A raft of policies and measures has transpired to facilitate flows of logistics and industries across the nation.

Efforts have been made to implement targeted traffic control by category, improve services for truck drivers, and ensure the transport of vital medical supplies, and people's livelihood, energy and agricultural supplies, according to departments, including the Ministry of Transport (MOT) and the Ministry of Public Security.

To ensure efficient operation of the transportation network's backbone, a unified national pass for vehicles transporting vital supplies was adopted by 24 Chinese provinces by the end of April, with transit stations for emergency supplies opened in epidemic-hit regions such as Shanghai.

MOT data showed that all expressway toll stations and service areas once temporarily closed nationwide had reopened as of May 4, without any temporary closure of toll stations on provincial highways.

Apart from preferential taxation support, Chinese authorities announced that eligible express delivery income would be exempt from value-added tax from May 1 to the end of the year. It is likely to reduce the burden for related enterprises by about 1 billion yuan (148.96 million U.S. dollars).

These offered only a glimpse of nine primary policies and measures targeted at firms in the transport and logistics sectors introduced by the Ministry of Finance and other departments, along with incentives from the central bank and the country's top forex and banking regulators.

Dong Yu, executive vice president of the China Institute for Development Planning, Tsinghua University, said to enliven logistics by smoothing micro-circulation, "we should make better use of new technology with more efficient scheduling."

As intelligent unmanned delivery vehicles deliver goods on roads in Guangdong and Shanghai, cities including Beijing have established a "white-list" mechanism to secure the delivery capacity of fresh produce suppliers.

Efforts will ensure the solid implementation of the "white-list" approach to support the resumption of work for key companies and remove bottlenecks in some places, said Xin Guobin, vice minister of industry and information technology, in an interview with Xinhua.

His remarks came in light of the new challenges that have emerged since mid-March, including sporadic resurgences of COVID-19 and a complex external environment, resulting in the suspension of some factory activities and freight transport.

In southwest China's Chongqing Municipality, millions of integrated chips are produced on a daily basis and delivered to downstream enterprises from the China Resources Microelectronics industrial park.

Zhuang Hengqian, deputy general manager of the company, said that much of the company's raw materials are from the Yangtze River Delta. But since the government promoted active resumption of "white-listed" enterprises, their production has gradually returned to normal.

Currently, the country is seeing an accelerated pace of resumption of production in key areas and industries, Xin said, adding that 86.8 percent of enterprises among the 666 companies included in the first batch of the "white list" in Shanghai had resumed work by April 28.

With swift countermeasures to stabilize the industrial and supply chains, the country's industrial economy has shown positive signs of stabilization, seen in a narrowed decline in industrial electricity consumption for two consecutive weeks since the second week of April, Xin added. -