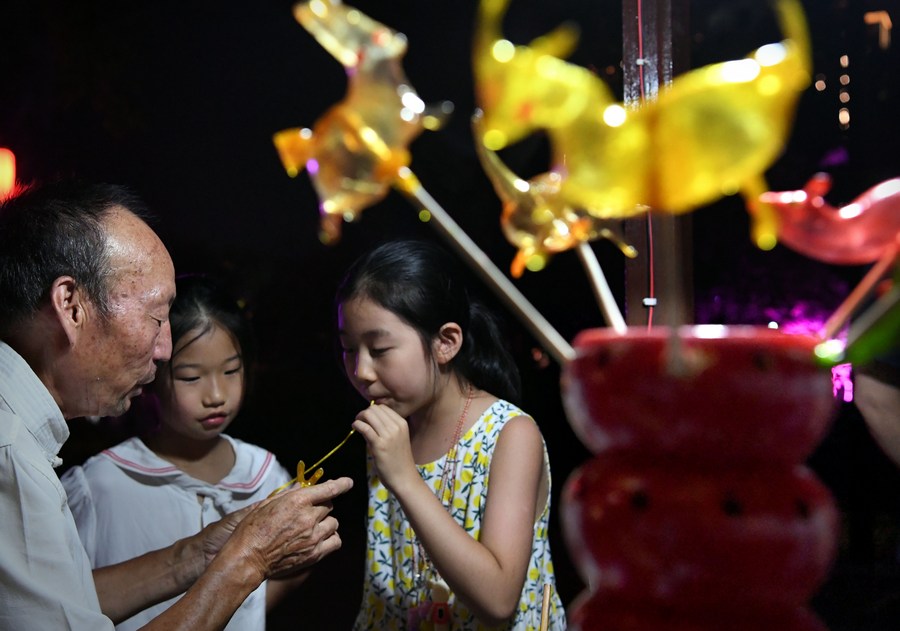 As Xiong Chuanfa, 34, blows a lifelike fawn out of molten maltose in just minutes, kids gaze at him with astonishment thinking he is a magician.

Xiong has been engaged in blowing sugar-figurine, a Chinese traditional folk art with a history of over 600 years, for over two decades.

In this unique art form, the artist heats the syrup to a certain temperature, pulls off a small portion, kneads it into a ball with an open center, pinches the open area together and stretches it to form a tube. Then he blows air into the tube and molds the sugar ball into different shapes. The traditional folk art has been listed as a state-level intangible cultural heritage.

Every morning, Xiong prepares the molten syrup and drives to areas near Wanshou Palace, one of the most lively historical and cultural blocks in Nanchang, east China's Jiangxi Province, to start his "magic show."

"Many people, particularly the kids, are attracted by this sugar art. After all, the ancient craft is fading," Xiong said.

Ngendakumana Pie Patrick Simon, from Burundi, was tempted by a sugar Bing Dwen Dwen, the mascot of the Beijing 2022 Winter Olympics, in Xiong's stall and couldn't resist giving it a try.

However, he couldn't get the desired shape despite numerous attempts. "It looks easy, but actually very difficult to master hands-on," said Ngendakumana, who is a student at Nanchang Hangkong University.

Thanks to Xiong's helping hand, Ngendakumana finally saw a horse gradually taking shape. "Can't believe I've done this," Ngendakumana said, expressing his exhilaration at how a pot of sugar syrup has turned into something "truly spectacular."

Xiong said that blowing sugar figurines can be traced back to the Ming Dynasty (1368-1644) and that his family has passed down this intangible cultural heritage for four generations.

"My 6-year-old son often blows up a balloon-like sugar figure, just like what I used to do as a child," he said.

Xiong's wife Wang Li is a sugar painting artist, which is a form of traditional Chinese folk art using hot, liquid sugar to create two-dimensional objects on a marble or metal surface.

Ngendakumana was deeply moved after learning about the family's story. "None of the cultural heritage left by our ancestors should be forgotten. They are name cards of the splendid Chinese culture and should be spread around the world," he said.

In addition to exhibiting their skills at fairs, the couple also stops by colleges to draw youngsters closer to the traditional art and make them experience its charm.

"Sugar paintings and sugar figurines are childhood memories of several generations of Chinese people. We try to combine paper-cutting skills and modern element modeling on the basis of traditional techniques, making them conform to the current trend while striking a balance between beauty and taste," Xiong said.

"We will spend the rest of our lives to help pass on this intangible heritage," he added.