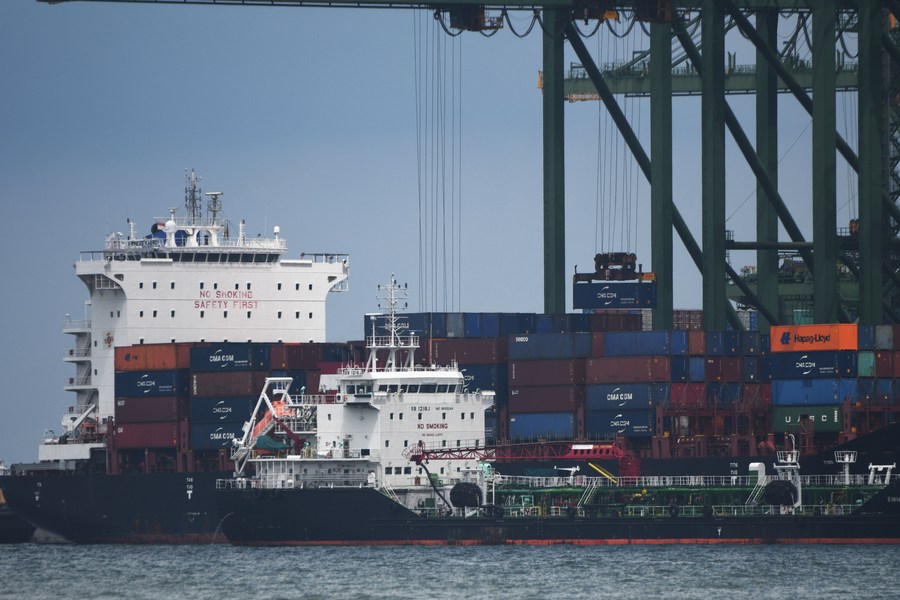 Container ships are berthed along with the port at Singapore's Pasir Panjang Container Terminal on Aug 11, 2021. [Photo/Xinhua]

The Regional Comprehensive Economic Partnership, which took effect on Saturday, will spur economic growth in the Asia-Pacific region as it opens up markets and counters protectionism, experts say.

Consisting of 15 Asia-Pacific countries, the RCEP forms the world's largest free trade area. It is made up of the 10 members of the Association of Southeast Asian Nations, plus China, Japan, the Republic of Korea, Australia and New Zealand.

Covering about 30 percent of the world's population, as well as its gross domestic product and trade volume, the agreement ushers in greater economic integration among Asia-Pacific countries and marks a victory for multilateralism and free trade, observers said.

"It will play a role in creating some degree of confidence that trade integration-at least in moderate terms-will continue," said Manu Bhaskaran, chief executive of Centennial Asia Advisors, a think tank in Singapore. "In an age of growing protectionism and inward-looking policies, this is welcome."

Francis Chua, founding chairman of the International Chamber of Commerce in the Philippines, said the RCEP is expected to consolidate the position of ASEAN members within a larger grouping built on "a modern, comprehensive, high-quality, and mutually beneficial economic partnership agreement".

The regional bloc comprises Indonesia, Thailand, Singapore, Philippines, Malaysia, Vietnam, Brunei, Cambodia, Myanmar and Laos; some of the ASEAN members are yet to ratify the pact.

In an online report, the ASEAN Secretariat said the entry into force of the RCEP "is a manifestation of the region's resolve to keep markets open; strengthen regional economic integration; support an open, free, fair, inclusive, and rules-based multilateral trading system; and, ultimately, contribute to global post-pandemic recovery efforts".

"The ASEAN Secretariat remains committed to support the RCEP process in ensuring its effective and efficient implementation," the report says.

Chua said the pact will ensure the opening of markets and strengthen supply chains and, this way, support an economic rebound. Apart from requiring the trade partners to cut tariffs, he said, the RCEP will enhance the harmonization of non-tariff measures such as product standards for food safety, packaging and labeling requirements.

Sanjay Mathur, chief economist for Southeast Asia and India at ANZ Bank, cited China's huge economy and how it will serve as the "pivotal market" for all RCEP members.

The pact's members "will now have (increased) access to the second-largest economy in the world, so that is a huge step forward", he said.

Bhaskaran said that China, as a leading nation in Asia, can nudge the RCEP members to adopt "broader and deeper integration "in the region.

At the same time, some analysts have pointed out that the RCEP's promise of unfettered trade and its many benefits will take time as the tariff reductions will take place gradually over the next 20 years.

Asian Development Bank economists have estimated that by 2030, the trade agreement will increase the income of the participating economies by 0.6 percent and create 2.8 million jobs. They also see a rise in intra-RCEP investment. This is because the pact prohibits performance requirements-like a specific percentage of domestic content or technology transfer-being placed on investors as conditions for market access.

The RCEP is now being implemented in Australia, Brunei, Cambodia, China, Japan, Laos, New Zealand, Singapore, Thailand and Vietnam. It will take effect in the ROK on Feb 1. Indonesia's parliament commission that supervises trade has given the pact the green light but full ratification by the legislature is needed.

Josua Pardede, an industry and regional analyst at the Jakarta-based Permata Bank, said the RCEP will accelerate the entry of smaller Indonesian enterprises into the global value chain, but these businesses also face competition from imports as they largely depend on domestic markets.

Pardede said that in principle, any trade agreements-particularly large ones like the RCEP-have the potential to increase trade value and attract investments into member countries because of a decrease in trade barriers.

Danilo Fausto, president of the Philippine Chamber of Agriculture and Food, has some concerns for the agricultural sector in his country, which has yet to ratify the pact.

While he believes the trade pact will open up markets for Philippine products, the Philippines also has to allow in more imports-a risky proposition for the nation's farm sector.

He points out that unlike their counterparts in some other countries, Filipino farmers do not enjoy big government subsidies, huge tracts of land or extensive access to credit. This has long been a problem for those engaged in farming, as the sector has not been among the priorities for the government, Fausto said.

Leonardus Jegho in Jakarta and Xinhua contributed to this story.