-- China's Tibet Autonomous Region is celebrating the 70th anniversary of peaceful liberation -- a turning point in the region's history -- as it starts a new journey of modernization after decades of leapfrog development.

-- In just a few decades, the Communist Party of China has united and led the people of all ethnic groups in Tibet to make unprecedented historical achievements.

-- Efforts must be made to build a new, modern, socialist Tibet that is united, prosperous, culturally advanced, harmonious, and beautiful, Xi Jinping has said.

China's Tibet Autonomous Region is celebrating the 70th anniversary of peaceful liberation -- a turning point in the region's history -- as it starts a new journey of modernization after decades of leapfrog development.

With the peaceful liberation in 1951, the people of Tibet broke free from the fetters of invading imperialism for good, and embarked on a bright road of unity, progress and development.

In late July, Xi Jinping, general secretary of the Communist Party of China (CPC) Central Committee, Chinese president and chairman of the Central Military Commission, visited the region to extend congratulations on the occasion, the first time in the history of the Party and the country.

"It has been proved that without the CPC, there would have been neither New China nor new Tibet," Xi said during the visit. "The CPC Central Committee's guidelines and policies concerning Tibet work are completely correct." Decorations for the Spring Festival and the Tibetan New Year are seen in front of the Potala Palace in Lhasa, capital of southwest China's Tibet Autonomous Region, Feb. 8, 2021. (Xinhua/Chogo)

Thubten Gyaltsen, 81, clearly remembers his miserable days in old Tibet and has witnessed the great transformation of the region.

"My parents were serfs and we could barely fill our stomach," he said.

In old Tibet, the three major stakeholders -- officials, aristocrats and higher-ranking lamas -- and their agents, made up about 5 percent of the population but owned almost all of the land and most of the livestock. Serfs and slaves had no means of production or freedom of their own and were subjected to exploitation and oppression.

In 1959, democratic reform was launched and feudal serfdom was finally abolished in Tibet. A million serfs and slaves were emancipated.

Now, Thubten Gyaltsen and his family live in a two-story house with 13 rooms and a garage in the city of Xigaze. Five in his family of six enjoy wages or pension.

"Our lives couldn't be happier, and we are experiencing a totally different world compared with the old days," Thubten Gyaltsen said. 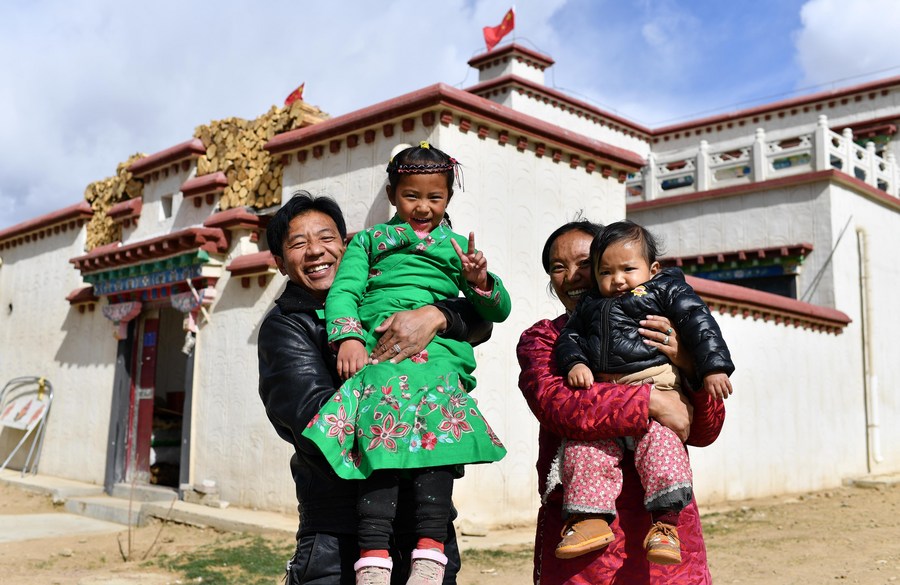 Nijia (1st L) and his family members pose for a photo in front of their house at the Rongma relocation settlement, a local poverty alleviation project, in Gurum Township of Lhasa, capital of southwest China's Tibet Autonomous Region, April 2, 2020. (Xinhua/Zhan Yan)

Over the past 70 years, the central government has introduced many favorable policies for the region, covering tax and finance, infrastructure, industrial development, education, health, cultural preservation and environmental protection.

Since 1978, the CPC Central Committee has held seven national meetings on Tibet to adopt major decisions and plans for the region.

"We must make improving people's livelihoods and rallying public support the starting points and ultimate goals for economic and social development," said Xi at the seventh Central Symposium on Tibet Work in August 2020.

In 2020, the regional GDP exceeded 190 billion yuan (about 29.3 billion U.S. dollars). The per capita disposable income of rural residents in the region was 14,598 yuan, representing double-digit growth for the past 18 years, while that of urban residents came in at 41,156 yuan.

By the end of 2019, all registered poor residents in Tibet had shaken off poverty, marking the elimination of absolute poverty in the region for the first time in history.

In just a few decades, the CPC has united and led the people of all ethnic groups in Tibet to make unprecedented historical achievements. Tibet has progressed "from darkness to light, from backwardness to progress, from poverty to prosperity, from autocracy to democracy, from closure to opening up," said an editorial on Tibet slated to be published on the People's Daily on Thursday.

The social system in Tibet has achieved a historic leap, the economy and society have made all-round development, people's lives have been greatly improved, and the urban and rural areas are not what they used to be, the article added. 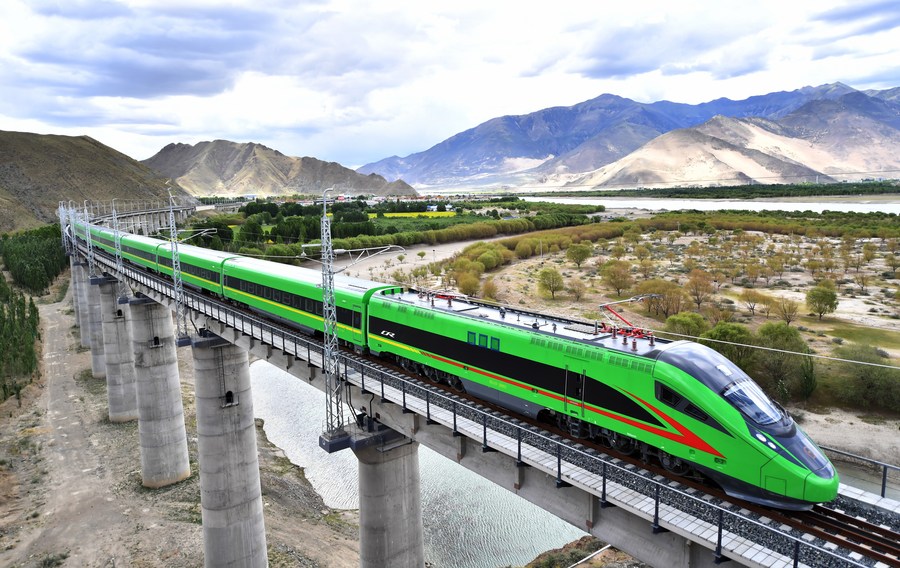 Efforts must be made to build a new, modern, socialist Tibet that is united, prosperous, culturally advanced, harmonious, and beautiful, Xi has said.

In the new era, under the strong leadership of the CPC Central Committee with Xi at the core and with the vigorous support of the whole country, Tibet has eradicated absolute poverty and achieved moderate prosperity in all aspects. People in the region enjoy a stable social environment, economic and cultural prosperity, a sound eco-environment, and lead better lives.

Tibet has also been increasing the level of specialization in production and boosting production efficiency. The comprehensive mechanization rate for growing staple crops has reached 65 percent. The region has established a comprehensive transport network of highways, railways, air routes and pipelines.

Stretching 1,956 km from Xining, capital of Qinghai Province, to Tibet's regional capital Lhasa, the Qinghai-Tibet Railway linking Tibet with the rest of the country opened in 2006. The Lhasa-Nyingchi railway, the region's first electrified railway, started official operation in June this year, with advanced Fuxing bullet trains running on it.

From 1951 to 2020, the central government invested 224 billion yuan in Tibet's education sector. The region now has a modern educational system that includes preschool, primary and middle schools, higher education institutions, as well as vocational and technical schools.

During his inspection tour in Tibet last month, Xi said people of all ethnic groups had jointly contributed to the development of Tibet and written the history of Tibet. 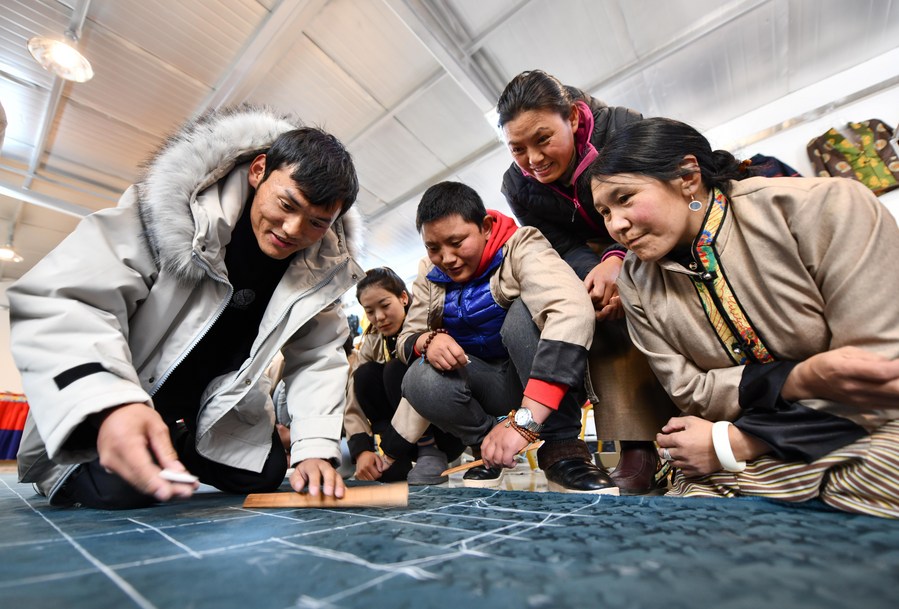 The continuous pairing-up support programs in Tibet from the rest of the country have facilitated Tibet's new industrialization, IT application, urbanization and agricultural modernization over the past few decades.

Zhang Honglin, who works with a leading egg producer in central China's Hubei Province, is playing his role in promoting agricultural modernization in Tibet. Last year, he set up a large egg production company in Shannan City of the region.

Zhang said that his company has brought advanced technology, equipment, management methods and experience to help the industry become competitive and maintain high-quality development. "We have also made many improvements based on Tibet's special plateau climate environment."

"Practice has fully proved that Tibet can enjoy a prosperous present and a bright future only by unswervingly upholding CPC leadership, socialism with Chinese characteristics, and the system of regional ethnic autonomy," said Zhuang Yan, deputy Party chief of the autonomous region. Enditem