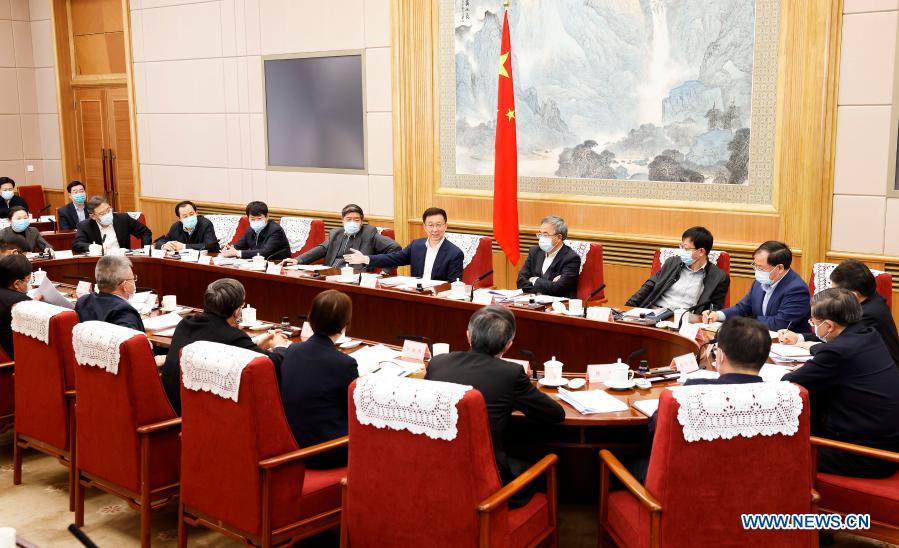 Chinese Vice Premier Han Zheng, also a member of the Standing Committee of the Political Bureau of the Communist Party of China Central Committee and head of the leading group on deepening all-round reform and opening-up of south China's Hainan Province, presides over a meeting of the group in Beijing, capital of China, Dec. 23, 2020. (Xinhua/Huang Jingwen)

Han, who heads a leading group on deepening all-round reform and opening-up of south China's Hainan Province, made the remarks while presiding over a meeting of the group in Beijing.

Initial successes have been achieved and more efforts should go into implementing various measures to attain further progress in the construction of the free trade port, he said.

On June 1, China released a master plan for the Hainan free trade port, aiming to build the whole of Hainan Island into a globally influential, high-level free trade port by the middle of the century.

Attention should be directed to major industries and platforms to boost the real economy and promote the high-quality development of Hainan, the vice premier said.

A batch of major projects should be rolled out to enhance the infrastructure and social services in the Hainan free trade port, Han said, adding that environmental protection should be a component throughout the construction.

Han also called for accelerating the introduction of new policies related to offshore duty-free shopping, further advancing "zero tariffs" for some imported commodities, and effectively promoting the liberalization and convenience of trade and investment. Enditem