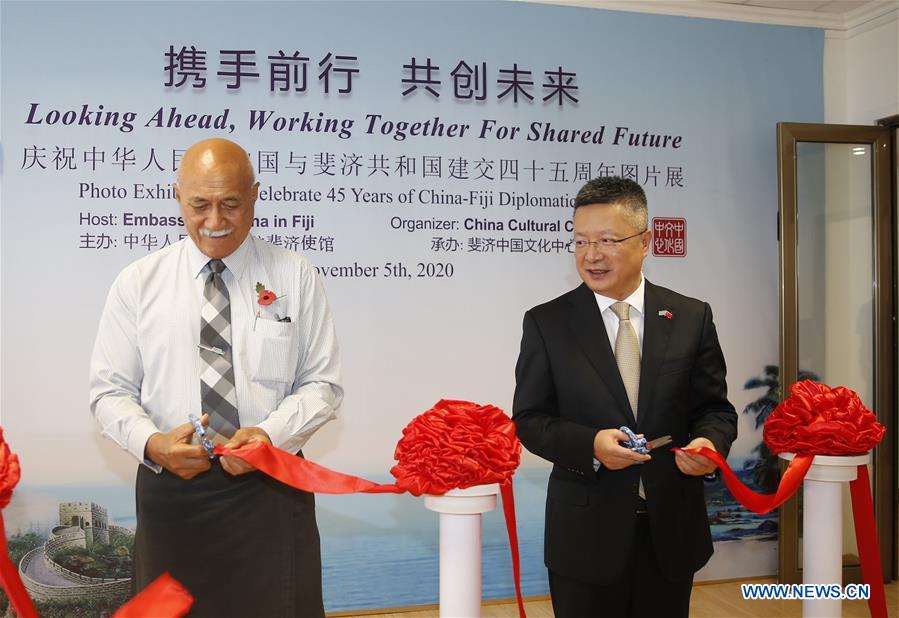 Fiji's President Jioji Konrote (L) and Chinese Ambassador to Fiji Qian Bo attend the opening ceremony of a photo exhibition held to mark the 45th anniversary of the establishment of the diplomatic ties between China and Fiji in Suva, Fiji, Nov. 5, 2020. The exhibition was jointly organized by the Chinese Embassy to Fiji and the China Cultural Center in Fiji. (Xinhua/Zhang Yongxing)

A photo exhibition was held here on Thursday to mark the 45th anniversary of the establishment of the diplomatic ties between China and Fiji.

The exhibition was jointly organized by the Chinese Embassy to Fiji and the China Cultural Center in Fiji.

Since the establishment of the diplomatic ties, the political trust between the two countries has further strengthened, practical cooperation has produced tangible results and people-to-people and cultural exchanges have been rich and colorful, Chinese Ambassador to Fiji Qian Bo said at the opening ceremony.

The ambassador said that with the joint efforts of the governments and peoples of the two countries, China-Fiji relations will embrace new opportunities and usher in a new chapter in the years to come.

Fiji's President Jioji Konrote, Fiji's former ambassador to China Ioane Naivalurua, officials of the Fijian government ministries and representatives of the Chinese community in Fiji were present at the opening ceremony.

The photo exhibition displays 74 photos showing the high-level visits and cultural exchanges between the two countries over the past years.

Later in the day, the Chinese Embassy held a reception to host Fijian Prime Minister Voreqe Bainimarama and staff of the Fijian Ministry of Foreign Affairs.

Acting Permanent Secretary for Foreign Affairs Yogesh Karan, on behalf of the prime minister, lauded the bilateral ties between the two countries, saying "Fiji has benefitted greatly from our cooperation and partnership with China in various fields including agriculture, infrastructure, defense, health, trade and investment, people-to-people exchanges, sports, education and most recently, the provision of medical equipment and supplies to tackle COVID-19."

While reiterating "Fiji's firm and steadfast commitment towards the one-China policy," he also praised China for the Belt and Road Initiative because "that is a real game-changer for global development."