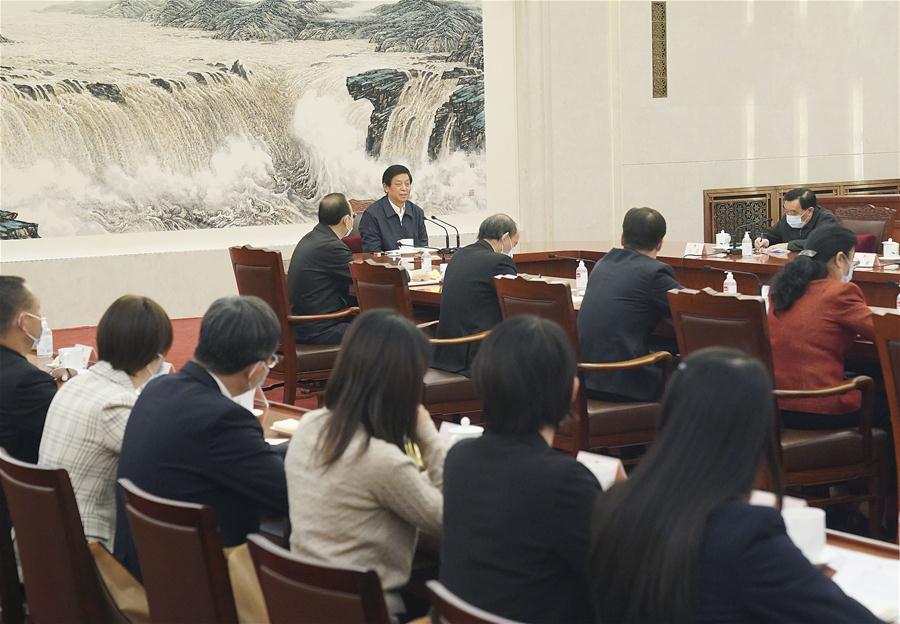 Li Zhanshu, a member of the Standing Committee of the Political Bureau of the Communist Party of China Central Committee and chairman of the National People's Congress (NPC) Standing Committee, speaks at a symposium with 51 NPC deputies, most of whom come from the grassroots levels, on the sidelines of a legislative session in Beijing, capital of China, Oct. 14, 2020. (Xinhua/Liu Weibing)

Chinese lawmakers Wednesday held group discussions to review bills including draft amendments to the National Flag Law and the National Emblem Law and a draft Yangtze River conservation law, during the ongoing session of the Standing Committee of the National People's Congress (NPC), China's top legislature.

Li Zhanshu, chairman of the NPC Standing Committee, joined lawmakers in the discussions.

Amending and improving the National Flag Law and the National Emblem Law is an important step to strengthen patriotism education in the new era and further implement the provisions of the Constitution on national symbols and core socialist values, said the legislators, suggesting the drafts be voted and passed at the session.

Lawmakers also discussed a draft amendment to the Electoral Law of the National People's Congress and local people's congresses. Explanations on the draft were made at the first plenary meeting presided over by Li on Tuesday.

They agreed that it is very necessary to enact the draft Yangtze River conservation law, noting it will be conducive to protecting the ecological environment of the Yangtze River basin and promoting green development. Enditem