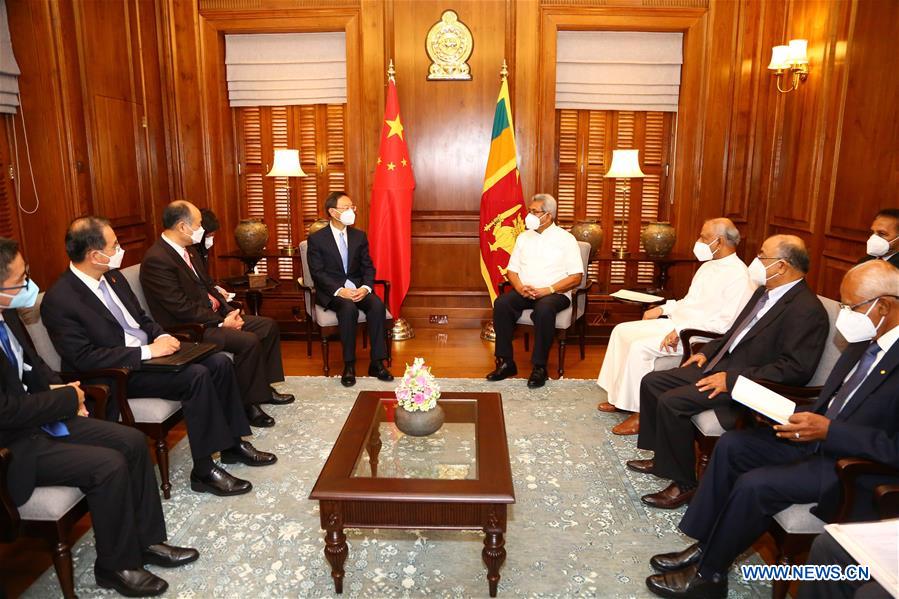 Sri Lankan President Gotabaya Rajapaksa (rear R) meets with Yang Jiechi, a member of the Political Bureau of the Communist Party of China (CPC) Central Committee and director of the Office of the Foreign Affairs Commission of the CPC Central Committee, in Colombo, Sri Lanka, on Oct. 9, 2020. (Photo by Ajith Perera/Xinhua)

Yang, a member of the Political Bureau of the Central Committee of the Communist Party of China (CPC), arrived in the island country on Thursday for an official visit.

During the meetings, Yang, who is also director of the Office of the Foreign Affairs Commission of the CPC Central Committee, said that the traditional China-Sri Lanka friendship has made further progress due to their mutual care and support in jointly combating the COVID-19 pandemic, while noting that the two countries have been strategic cooperation partners who have sincerely supported each other for generations.

Yang said that China, which always puts its relations with Sri Lanka at an important position, will, under the guidance of the important consensus reached between the two heads of state, continue to develop close bilateral exchanges at the top level, consolidate political mutual trust, map out long-term cooperation, strengthen strategic synergization, and advance the joint construction of the Belt and Road Initiative (BRI) to reap new fruits.

In addition, the senior Chinese official said that China will consistently push forward bilateral cooperation in various sectors including infrastructure, trade, tourism, agriculture, education, technology and the blue economy, and improve the well being of the two peoples.

Yang also said that China is willing to deepen the anti-epidemic cooperation with Sri Lanka, continue to jointly support the World Health Organization (WHO) playing a leading role, and join efforts to build a community of common health for the mankind.

In his talks with Yang, Sri Lankan President Gotabaya Rajapaksa said that his country's friendship with China has a long history, and that China's unselfish support for his country and its experience of state governance is highly important to Sri Lanka's socio-economic development.

He said Sri Lanka will firmly commit itself to deepening bilateral friendship, and is willing to make every effort to press forward the key BRI cooperation projects such as the Colombo Port City and the comprehensive development of the Hambantota Harbor, and raise the mutually beneficial cooperation between the two countries to a higher level to better benefit the two peoples.

Prime Minister Mahinda Rajapaksa said during his meeting with Yang that his country warmly welcomes the visit by the Chinese delegation, and that China's strong support in various fields has helped Sri Lanka strengthen its capacity to resume work and production amid the COVID-19 pandemic.

Sri Lanka will work with China to maintain the firm mutual support, and welcomes more Chinese companies to invest and do business in the island country, he said, while expressing hope for increasing bilateral people-to-people exchanges.

Sri Lanka is the first leg of Yang's five-day overseas trip which will also take him to the United Arab Emirates, Algeria and Serbia. Enditem