Chinese premier calls on China, EU to expand opening up for mutual benefits 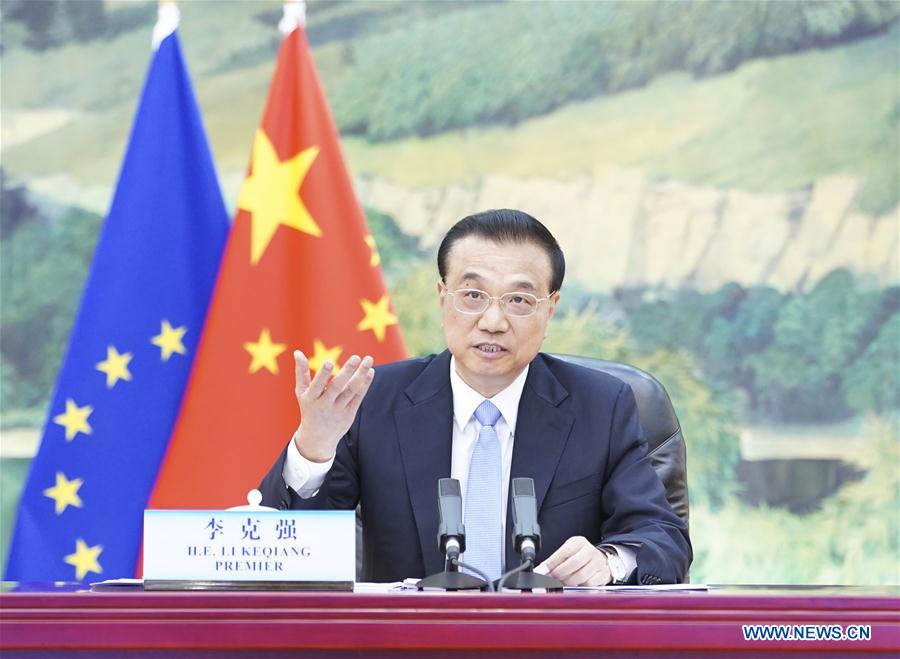 Chinese Premier Li Keqiang on Monday called on China and the European Union (EU) to expand two-way opening up and enhance practical cooperation so as to better achieve mutual benefits and win-win results.

China and the EU are each other's comprehensive strategic partners, the bilateral cooperation far outweighs competition, and there are far more areas where both sides agree than disagree, Li said.

China attaches great importance to its relations with Europe, he said.

This year marks the 45th anniversary of the establishment of diplomatic relations between China and the EU.

Li said since the establishment of diplomatic ties, the relationship between China and the EU has been generally defined by cooperation, which has enhanced the welfare of both peoples and brought stability to the world.

China has always supported the process of European integration, and is happy to see the EU maintain unity and prosperity, said Li.

He called on the two sides to view bilateral relations from a long-term perspective and with a broader vision, and regard each other as comprehensive strategic partners.

During the meeting, Li said China and the EU, both as major global economies, should strengthen macroeconomic policy coordination, maintain the stability of the industrial and supply chains, and inject impetus into global economic recovery in the face of COVID-19 impacts.

Li said China and the EU are committed to concluding the China-EU Comprehensive Investment Agreement in 2020 and reaching a comprehensive, balanced and high-level agreement.

He called for the signing of the China-EU geographical indications agreement at an early date.

China is unswervingly dedicated to expanding opening up, and committed to creating a market-oriented and world-class business environment with a sound legal framework for companies from all countries, said Li, adding that European companies have enjoyed the benefits.

China hoped the European side would also keep its trade and investment market open and relax the export control toward China so as to facilitate bilateral high-tech trade, Li said.

"Expanding two-way opening up on the basis of equality, reciprocity and mutual respect will help China and the EU better achieve mutual benefits and win-win results," the premier said.

Hailing both China and the EU uphold multilateralism and free trade, Li said China is willing to maintain communication with the EU on issues such as the reform of the World Trade Organization (WTO), jointly safeguard the rule-based multilateral trade system, participate constructively in the multilateral process of combating climate change.

He called on both sides to continue to support the World Health Organization in playing a leading role in the global fight against COVID-19, deepen cooperation on vaccine and drug research and development, and work together to win the battle against the pandemic at an early date.

For their part, Michel and von der Leyen spoke highly of the mutual support and solidarity in the fight against COVID-19 between the EU and China.

The will of cooperation between the EU and China is not weakened although the pandemic has impacted many countries, they said.

Lauding China's active participation in the international cooperation on the fight against COVID-19 initiated by the EU, the EU leaders said the EU stands ready to enhance cooperation with China on economic recovery, jointly safeguard the safety of the industrial and supply chains, and further expand market opening.

They also called on both sides to strengthen connectivity, intensify cooperation on areas including trade, investment and digital economy, and reach the China-EU Comprehensive Investment Agreement in 2020.

Besides, China and the EU should enhance cooperation on the WTO reforms and climate change, and uphold multilateralism and free trade, they said.

The two sides also had an in-depth exchange of views on regional and international issues of common concern. Enditem