As the clock struck noon, Cai Kaijun, an urban construction worker, boarded a free air-conditioned bus stationed outside the construction site to get some rest after working in the searing heat throughout the morning.

In July, heat waves affected many parts of China, including Yichang City in central China's Hubei Province, bringing challenges to outdoor workers. To offer them some relief from the excruciatingly hot weather, Yichang Public Transport began a public service campaign starting July 8, parking nine air-conditioned buses at eight points in the city from 12 to 3 p.m. for them to enjoy a cool nap.

The relatively new buses have a strong cooling capacity, maintaining temperatures below 26 degrees Celsius inside.

"Due to the heat, not many passengers use buses during noon in Yichang. So, during this time we allocate vehicles from bus routes with excess transport capacity to be stationed near eight urban construction sites for the workers to rest," said Wang Jie, deputy general manager of Yichang Public Transport.

Daily necessities, including water and heatstroke prevention medicines, are available in these vehicles. The windows are equipped with curtains offering privacy to the workers. In addition, most of these buses are all-electric vehicles with a low noise level, offering a quiet environment for rest.

"I come to the bus every day. Thanks to the air conditioning, I feel refreshed after some much-needed rest," Cai said. 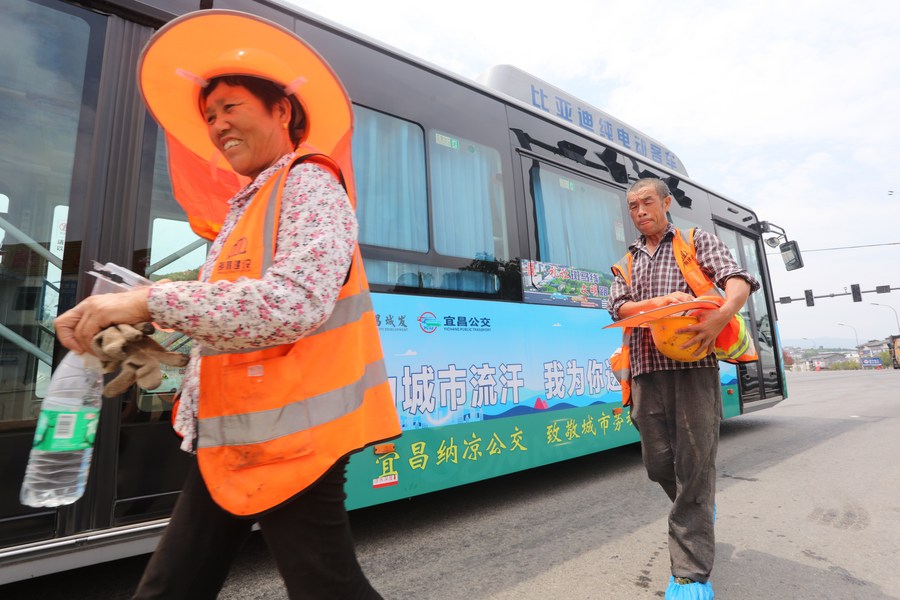 Unlike other construction workers, construction workers of urban utility projects can not set up sheds near construction sites to rest in the noon. "I once spotted some workers resting under a bridge on a sweltering day in a noisy environment. I wanted to do something for them and later the idea of providing air-conditioned buses occurred to me," Wang said.

Wang's idea got support from his colleagues. "It has been only about two years since all buses in the city got air conditioning, so we know what it is like for the outdoor workers in the summer heat," said Guo Yong, a bus driver who volunteered to take part in Wang's initiative.

To make these air-conditioned buses more attractive, Li Jiabing, a manager of the public transport company, had the buses repainted with blue and green colors and put on a slogan that says: You sweat to build our city, we provide you a cool place for nap.

The initiative has also received widespread support from residents and local enterprises. They sent watermelons and drinks for the workers.

"A middle school student used his birthday party money to buy 10 packs of bottled water for the workers," Wang said.

"The buses will remain there until the end of the high-temperature period," he said, adding that more and more people can now enjoy the service, including delivery persons, sanitation workers and passersby.  ■