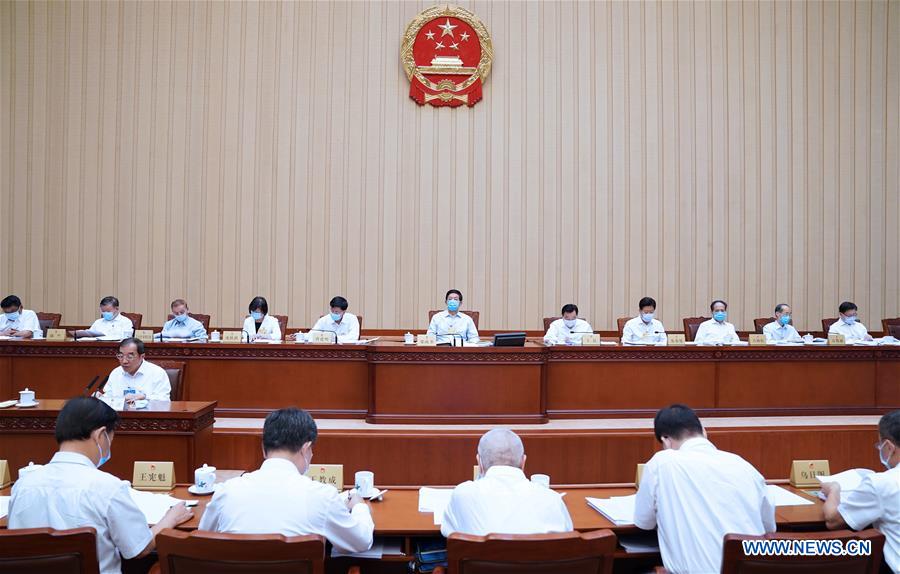 Li Zhanshu, chairman of the National People's Congress (NPC) Standing Committee, attends the second plenary meeting of the 21st session of the 13th NPC Standing Committee at the Great Hall of the People in Beijing, capital of China, Aug. 10, 2020. (Xinhua/Zhang Ling)

Chinese national lawmakers met on Monday morning to deliberate a draft decision and multiple reports at a plenary meeting during the 21st session of the Standing Committee of the 13th National People's Congress (NPC), China's top legislature.

Lawmakers heard the explanations to a draft decision on conferring the national medal and honorary title to individuals who made outstanding contributions to fighting the COVID-19 epidemic.

The State Council submitted to the session a report on implementing the innovation-driven development strategy and promoting the enforcement of the Law on the Progress of Science and Technology, and a report on the law enforcement of public security organs.

According to the public security report, public security organs nationwide have improved their law enforcement and fulfilled their duties in accordance with the law, and have effectively maintained social stability.

The National Supervisory Commission submitted a work report on fugitive repatriation and return of criminal proceeds. A total of 7,831 fugitives on suspicion of duty-related violations were brought back from overseas from 2014 to June 2020, according to the report.

In the afternoon, Li also presided over a meeting of the Council of Chairpersons of the NPC Standing Committee to hear reports on bill deliberations.