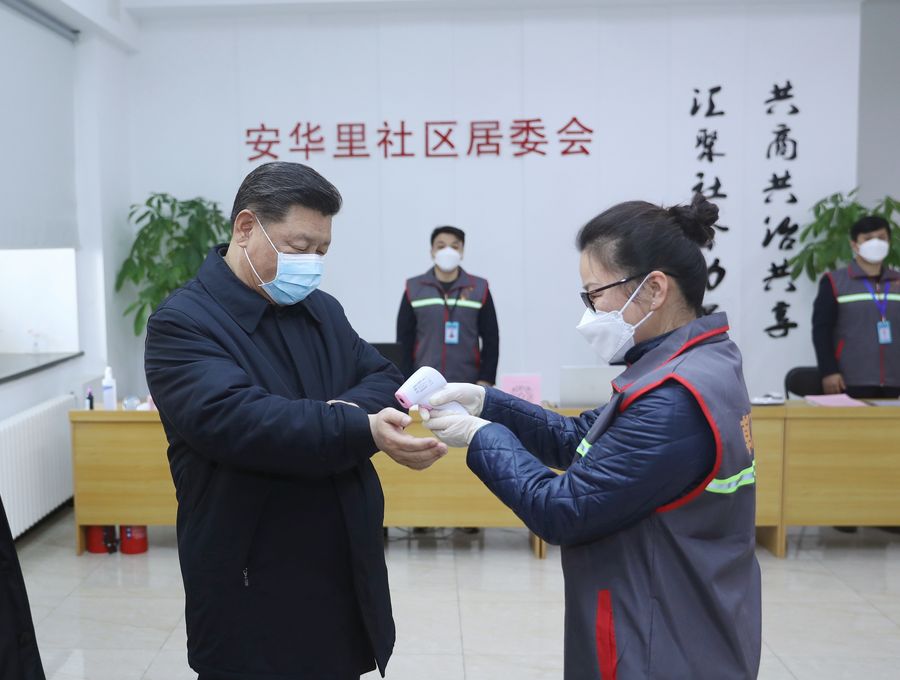 Xi said the situation at the moment remains very serious but expressed confidence that China can certainly obtain a full victory in the fight against the epidemic.

Wearing a mask, Xi, also Chinese president and chairman of the Central Military Commission, visited a residential community, a hospital and a district center for disease control and prevention in Beijing.

The inspection came at a time when many people outside the epidemic center of Hubei Province resumed work after an extended holiday.

Xi said the situation at the moment remains very serious but expressed confidence that China can certainly obtain a full victory in the fight against the epidemic. 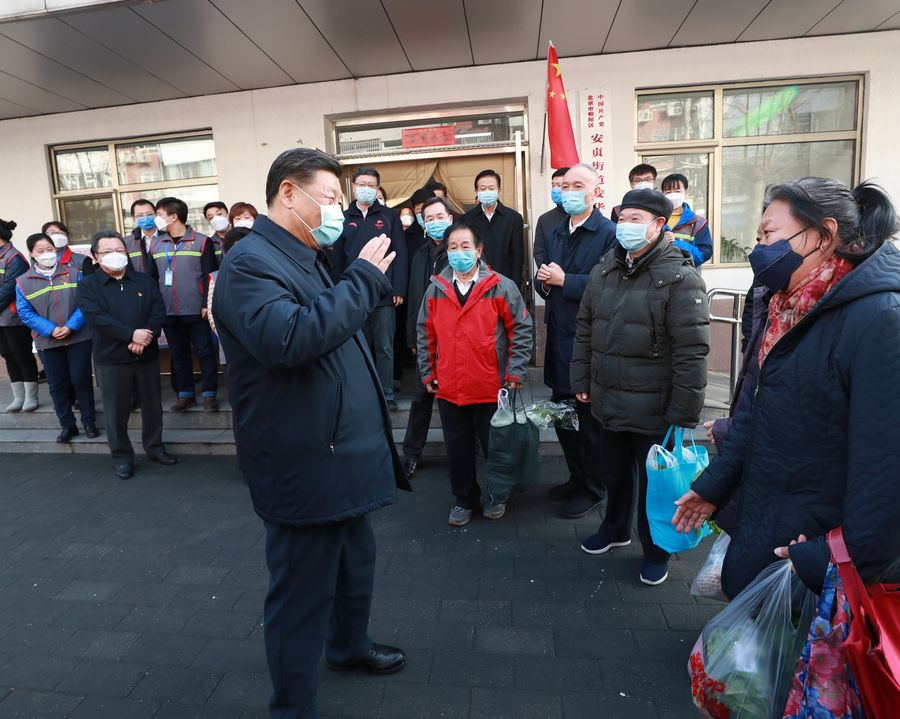 He first went to the Anhuali Community in Chaoyang District to learn about the epidemic prevention and control at the primary level and stressed the role of community in effectively containing the spread of the epidemic.

At Beijing Ditan Hospital, a designated institution treating the novel coronavirus pneumonia, Xi checked the treatment of hospitalized patients at the monitoring center and talked to medical staff on duty via a video link.

Xi called on medical staff to continue to improve the diagnosis and treatment plan, save patients at all costs and reminded them to take good self-protection. 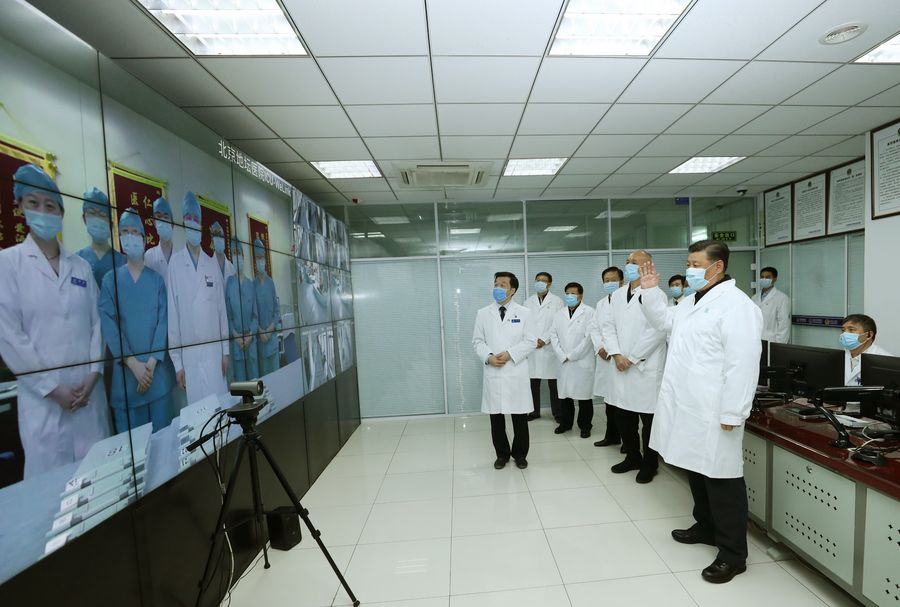 President Xi Jinping talks to medical staff on duty via a video link at Beijing Ditan Hospital in Beijing, capital of China, on Feb. 10, 2020. (Xinhua/Ju Peng)

At the hospital, Xi talked to frontline medical workers in three hospitals in Wuhan receiving infected patients with a telemedicine system, encouraging them to resolutely carry on the fight to defend the city, capital of Hubei.

Xi expressed deep condolences to those who died from the novel coronavirus pneumonia outbreak and extended sympathy to their bereaved families and stressed that the whole Party, armed forces and people of all ethnic groups in China should stand together with the people of Hubei and Wuhan.

"Wuhan is a heroic city, and people of Hubei and Wuhan are heroic people who have never been crushed by any difficulty and danger in history," Xi said, speaking to officials fighting the epidemic in Hubei in a video-conference.

President Xi Jinping inspects the center for disease control and prevention of Chaoyang District in Beijing, capital of China, on Feb. 10, 2020. (Xinhua/Liu Bin)

Leaving the hospital, Xi went to the center for disease control and prevention of Chaoyang District. Xi presided over a meeting and listened to report on the epidemic prevention and control work of Beijing.

Xi highlighted the urgency of putting in place targeted measures to address the rising risk of epidemic spread following the post-festival travel peak, called for efforts to work out more effective treatment plans to reduce the rates of infection and mortality and demanded resolute punishments on illegal activities such as price gouging.

Xi stressed that the fundamentals of China's long-term economic development remain unchanged and the impact of the novel coronavirus epidemic on the economy is short-lived.

He called for greater efforts to minimize the impact of the epidemic on the economy and reach goals and tasks of economic and social development this year. Close attention must be paid to employment and large-scale layoffs should be avoided, he added.

President Xi Jinping checks the treatment of hospitalized patients at the monitoring center and talks to medical staff on duty via a video link at Beijing Ditan Hospital in Beijing, capital of China, on Feb. 10, 2020. (Xinhua/Xie Huanchi)

Xi is the commander of the people's war against the epidemic.

Over the past few weeks, he has called multiple meetings, heard reports, made important instructions on the prevention and control work and discussed the topic with foreign leaders.

One message is consistent and crystal clear: People always come first. Xi has stressed putting people's lives and health as the top priority.

On Jan. 25, Xi chaired a meeting of the Standing Committee of the Political Bureau of the CPC Central Committee and demanded that epidemic prevention and control be taken as the most important task.

In the last week of January, Xi entrusted senior officials to inspect epidemic control work in Wuhan, made instructions to Party organizations, members and officials as well as the military and met with the World Health Organization (WHO) Director-General Tedros Adhanom Ghebreyesus.

In early February, Xi again chaired a meeting of the Standing Committee of the Political Bureau of the CPC Central Committee on epidemic prevention and control and later a high-level meeting on overall law-based governance, requiring strong legal guarantee to epidemic control.

Under Xi's leadership, China has carried out national mobilization, across-the-board deployment and swift responses, adopted the most comprehensive and rigorous prevention and control measures and launched a people's war against the epidemic.

Though the battle remains arduous, especially in Hubei, the number of daily new confirmed cases outside the province has been dropping for six consecutive days since Feb. 4.

Xi told King Salman that the strong measures China has taken are not only responsible for the health of the Chinese people, but have also made huge contributions to the world's public safety.

According to statistics of the WHO, the outbreak has affected about two dozens countries but all with limited cases.

"We would have seen many more cases outside China...if it were not for the (Chinese) government's efforts and the progress they have made to protect their own people and the people of the world," Tedros, the WHO chief, said. ■